Seeding for the Ulster Rally

Seeding for the Ulster Rally

The submission of entries phase of the 2017 John Mulholland Motors Ulster Rally is drawing to a close with seeding of the entries taking place this weekend.

Event Director, Robert Harkness explains; “Seeding is a complicated process that decides the running order of the competitors in the event. It is a key part of the event both for the competitors but also for the running of the event itself. It must not only reflect the pace of each competitor but also consider their current position in the major championships and respect the requirements of teams running two or more cars.

Robert continues; “There are six high speed special stages on closed for the event public roads on Friday 18 August and eight more on Saturday 19 August. This is the core of the competition and why seeding is so important.”

The John Mulholland Motors Ulster Rally is the only rally in Ireland that represents the FIA European Celtic Rally Trophy, the Prestone British Rally Championship and the Clonakilty Irish Tarmac Rally Championship. The entries reflect this influence as competitors pursue their own targets. 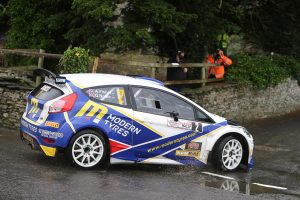 The FIA Celtic Trophy is currently led by Alistair Fisher and Gordon Noble from Fermanagh and they have entered in their Ford Fiesta R5 where they will defend their seven point lead. The same crew are well placed in the Irish Championship where they currently lie second, seven and a half points behind Monaghan based Sam Moffett and Karl Atkinson. However later in the series when ‘dropped scores’ and year end points come into play it is apparent that Fisher/Noble are currently the best placed crew to take the Irish title.

The competition is of coursed spiced up by the only head to head of the year between the Irish Championship and the Prestone British Rally Championship. 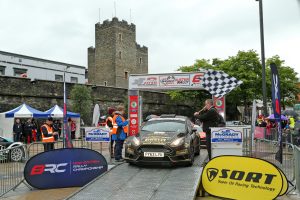 The British Rally Championship is currently led by Fredrik Ahlin and Torsten Eriken from Sweden in their Skoda Fabria R5 who are only twenty two points ahead of Welsh based Osian Pryce and Dale Furniss. But there are thirty points for a win.

The wild card in all this is Irishman Keith Cronin and his co-driver Mike Galvin who must be seen as potential rally winners. There are also entries from other front runners such as Desi Henry in his Skoda Fabia R5, Jonny Greer in a Citroen DS3 R5, Marty McCormick in another Skoda and Marty Gallagher in the Visit Derry supported Peugeot 208R 2. It goes on and on.

The full seeded entry list will be published on www.ulsterrally.com on Monday 7 August 2017.