Modern Tyres – Ireland’s largest retail tyre company – will be the headline sponsor of the 2021 Ulster International Rally when it takes place on its new date of November 19th/20th.

Started in 1965 by Jimmy Byrne, the family-owned business operates 45 branches in Ireland and has regularly supported motorsport in the province. The unmistakable Modern Tyres branding has taken pride of place on the rally cars campaigned by Alastair Fisher and Gordon Noble in the Irish Tarmac Championship and, prior to that, the Junior World Rally Championship (JWRC).

Rory Bryne – one of Jimmy’s four sons – is an avid motorsport supporter and competitor having campaigned various Evolutions of Mitsubishi’s famous four-wheel-drive Lancer over the years, including at the Ulster Rally in 2010, 2013 and again in 2014.

Commenting on the new agreement, Rory Byrne said: “Motorsport has been a passion of mine for many years and it’s a privilege for Modern Tyres to be associated with such a high-profile event. We are looking forward to supporting the organising committee to make the event as successful as we can. We wish the competitors and the supporters all the best for what will hopefully be a thrilling event in Newry.”

As part of its sponsorship deal with the Ulster Rally, the service park is relocating from its former Ashgrove Road site to Modern Tyres’ new manufacturing facility in Carnbane Industrial Estate; this is currently in the process of being built and is due to be completed next month. Modern Tyres also operate two branches in Newry: one in Carnbane and a second on Bridge Street.

Ulster Rally Event Director Richard Swanston said: “I am delighted to confirm Modern Tyres as the principal sponsor of this year’s Ulster Rally. Modern Tyres have backed rallying here for many years and I am pleased that we could come to an agreement that works for all ahead of November’s event.

“The Ulster Rally relies on sponsorship to make it viable and safeguard its future going forward,” added Swanston, “and I am extremely grateful for the help Modern Tyres has agreed to give us.”

Organised by Northern Ireland Motor Club, the closed-road Ulster Rally will host the final round of the 2021 British Rally Championship which Welshman Osian Pryce currently leads by just four points from Matt Edwards, with Matthew Wilson a further nine points behind Pryce in third.

The race to be crowned champion is also intensifying in the Junior British Rally Championship, with Donegal’s Eamonn Kelly currently topping the standings from Moira’s William Creighton.

“The Championship is finely poised with three points-scoring rounds left. I am sure everyone will agree with me when I say I hope all of the titles are decided on the Ulster Rally,” said Swanston.

Promoted by Northern Ireland Motor Club Limited, crews will have the opportunity to tackle a short shakedown stage on the afternoon of Friday, November 19th before the competitive action gets underway the following day. Supplementary regulations – and a rally guide for fans – are available on the Ulster Rally website, with entries now open on Rallyscore (www.rallyscore.net). 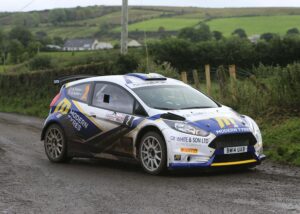 2016 John Mulholland Motors Ulster Rally 2nd Place finisher Alastair Fisher and Gordon Noble in their Ford Fiesta. The event was based in Derry/Londonderry and took place over 14 stages near the City on Friday 19 and Saturday 20 August.