A dramatic win for Keith Cronin on the Derry~Londonderry based John Mulholland Motors Ulster Rally keeps his British Rally Championship aspirations alive following a start to finish win in typically changeable wet weather conditions which pushed all the drivers to their limits. 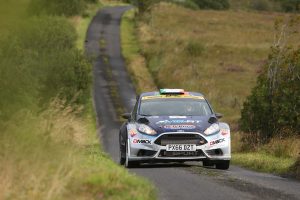 While the results show that Cronin was fastest on all the 14 stages in the North West, he was pushed hard on the Friday loop initially by Swede Fredrik Ahlin, before Welshman Osian Pryce turned up the heat to finish Friday just 0.01 seconds off the lead.

After the first day of torrential rain, weather improved for day two of the Rally and the both drivers were quickly back on the pace. However, it was Pryce who faltered first, spinning his Ford Fiesta on Special Stage 7, Slieve Kirk, handing 17 seconds to Cronin in the process. On the next stage Cronin handed back 14 seconds when he punctured a tyre near to the end of the Drumahoe test. 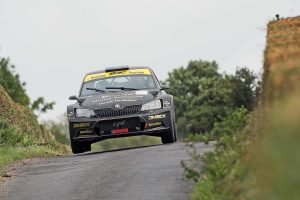 Pryce kept up the pressure on his rival over the next few stages but mechanical failure brought his challenge to a halt on Stage 11. This allowed Fredric Ahlin back into contention ahead of Carryduff’s Jonny Greer who was handily placed should any of the top two falter. 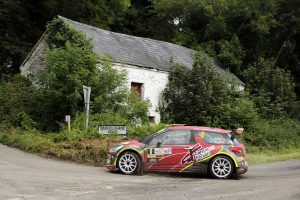 Marty McCormack pulled ahead of Sam Moffett in Stage 9, but Moffett’s 6th place maximised his Irish Tarmac Championship lead going into the final round in Cork.

Moffett’s nearest Championship rival, Alastair Fisher, was an early departure when his Ford Fiesta suffered overheating issues on only the second stage. 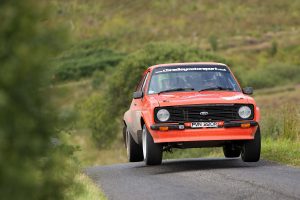 The battle between top Junior Competitors William Creighton and Callum Devine continued into day two before Devine was forced to retire on Stage 10 with electrical failure. Creighton continued on to finish 11th behind National Winner Camillus Bradley in his Mark II Escort.

Two wheel stars from 2016 Michael Dunlop and Rob Fagg were again putting in competitive times before brake failure pushed them off the stage and into retirement.

Rally sponsor, John Mulholland had a fraught run on Friday and never made up the time lost when he slid into a ditch in tricky wet conditions.

Commenting at the finish, Event Director, Robert Harkness said; “This has been a tremendous weekend of motorsport. The changeable weather conditions proved challenging for all the drivers, and the Organisers over the fourteen stages which made for an interesting event for rally fans”.

“I would like to congratulate not only the winners but everyone who supported the event whether they were a competitor, spectator, one of the 800 volunteers and our sponsors John Mulholland and Derry City and Strabane District Council who all made this year’s Ulster Rally such as success.”