On a quiet Sunday evening in early May Bryce Sands very unexpectedly passed away while watching television.

Only the previous Wednesday the Ulster Rally organising committee sat around a table planning the 2019 event, and the future. Bryce was there as usual making notes of what he had to do. Little did any of us know………

For over fifty years Bryce was dedicated to motorsport, and he enjoyed it all from beginning to end. Skill, knowledge and professionalism in everything came from his interest as a competitor, an event organiser and as a Steward on behalf of the governing body of motorsport. 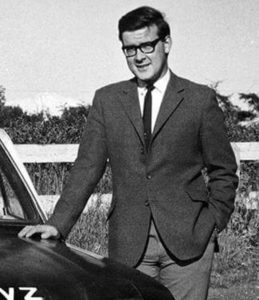 Bryce was a Dungannon man and when he left Dungannon Royal School he started work at the Moygashel Linen Mill. During his time there he studied for, and obtained, a Degree in Textile Chemistry and progressed through a series of management roles.

Photography was his other hobby and around this time he started taking action photos of rally cars. He continued to do so into the eighties and only recently completed the scanning of his black and white photos. 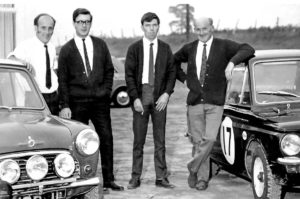 More importantly for us he joined Dungannon Motor Club around 1963, by 1968 he was a Committee member followed by Competition Secretary in 1969 and he was Club Secretary from 1973 until 1982. For Bryce this was a time full of honing his skills as an event organiser as well as a Club official. Bryce was also becoming a highly experienced rally navigator partnering Sydney Meeke to fourth place in the 1968 Northern Ireland Rally Championship in a rather special Ford Anglia. Jimmy Conlon and Bryce were another formidable crew in various Ford Twin Cam Escorts starting with local events in 1969 and continuing through larger events like the Texaco and Donegal until 1974. He also did one-off rallies with other people like Norman Reid and the Circuit of Ireland with Dessie McCartney.

Nothing stays the same forever. In the early eighties Bryce changed employment, moved to Co. Antrim and joined The Northern Ireland Motor Club to become involved in the Ulster Rally. Bryce came to the Ulster as an enthusiastic Deputy Clerk of The Course with a vast amount of skill and experience both inside and outside the car.

Bryce was a Deputy Clerk of the Course of the Ulster Rally for almost forty years. That is what he wanted, he did not see any attraction in being the Clerk of the Course, he had no interest in the politics or the financing of the sport, his interest lay in making the sporting side of rallies more professional. In parallel to this he devoted considerable time to making rallies safer for everyone through developing the event systems.

His knowledge as a competitor, an organiser and as an MSA Steward provided the skills and knowledge to do this, but that was not all. 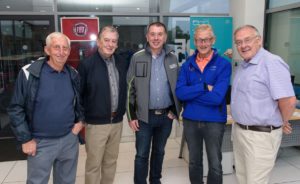 For some twenty years groups of Ulster Rally organisers roamed, usually at their own expense and as a group of friends, to many rallies in Scotland and Northern England. At times there were as many as eight officials on these forays and Bryce was very frequently one of them. The group often identified problems and bottlenecks in the events they visited and then spent a couple of days looking for solutions. Bryce was the great technical analyst and ideas were rejected or taken on board for further consideration before the group was home…….

Bryce had a natural ability that allowed him to identify territory and roads that made good special stage rally material and stages that would link together into a good rally. He was always a key member of the route design team for The Ulster Rally. More than that he put together the Road Books with his famous meticulous accuracy.

But at the core of his thoughts lay event safety and Bryce realised that the system of Stage Set Up Notes was inadequate. For the Ulster Rally he invented and developed what is now known universally as the Safety Plan. His format was in a form applicable to any Special Stage Rally and that form emigrated and is now widely used by most rallies in these islands. And, through the late Louis Gillet, into the Netherlands and beyond.

Bryce was the chief architect of efficient communication within the rally. With an almost military precision he created an internal communications system second to none. He advocated the widespread copying of emails within the core organising team simply that all were aware of progress. He then introduced the whole team to a new device at the time, called Dropbox. And it went on and on, communication, precision, perfection and command in a velvet glove – most of the time.

Many Clubs and events benefitted from the input freely given to them by Bryce, and after a lifetime in the sport he will be sorely missed by many, many people.

There is no better way to close off the story of Bryce’s well lived fifty years in rallying than to quote Bryce himself. These are his own words, as posted himself on his Facebook page last year. 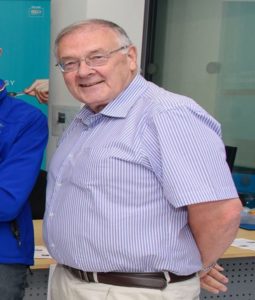 The Titanic Déja Vu Ulster 18 tour, had well over 100 rally cars from the 60’s, 70’s and 80’s for the run over six of the iconic Ulster Rally stages. It was an amazing day and I thoroughly enjoyed the run with John Taylor. John as you know won the Ulster Rally back in ’78 and then went on to win the Irish Tarmac Championship that year, Never in my dreams had I thought that I would ever again after some 40 yrs be back in a Mk2 listening to the sound of that BDG reverberating back from the houses going up through the hairpins in Glenoe village and over Torr Head. I must admit however that I had forgotten just how noisy they could be.