Edwards arrived in Newry knowing only maximum points from the seventh and final round of the BRC would guarantee him another drivers’ crown – and that is exactly what he delivered.
“To win three British rally titles in a row is very special, but what makes it even more special for me is that it’s been in the making for two years,” explained the Volkswagen Polo GTI R5 driver.

“We have had the pace all year. A few things haven’t gone as planned, but we always believed winning the title would happen. Everyone knows just how much the British Rally Championship means to me and I am very proud to have won the title three times in a row,” added Edwards. 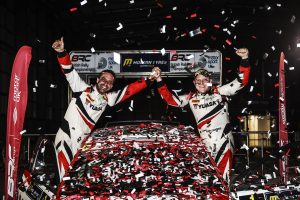 Osian Pryce was the only person who could deny Edwards but his dream of securing a maiden BRC title after coming runner-up on two previous attempts ended on the penultimate stage. He lost control of his Volkswagen on the greasy country roads and ended up in a field. Thankfully, both he and co-driver Noel O’Sullivan were able to walk away from the accident unharmed.

“It is difficult to accept that one small moment has undone everyone’s hard work and effort,” said an understandably crestfallen Pryce. “Of all the heart-stopping moments we managed to get away with in the tricky conditions, it had to be the little innocent one that caught us out.”

Northern Ireland champions Jonathan Greer and Kirsty Riddick were the main beneficiaries of Pryce and O’Sullivan’s demise as they moved up to second in their Citroen Racing C3 R5, 15.2 seconds clear of Callum Devine and Brian Hoy who battled back from an initial engine misfire, ride and set-up issues, and a trip into a field on stage two in their Ford Fiesta Rally2 supermini.

Josh Moffett had a solid run to fourth overall, with Keith Cronin and Sam Moffett overcoming an engine glitch and overheating brakes respectively to finish the event in fifth and sixth place.

In the Motorsport UK National Rally Championship, Garry Jennings and Rory Kennedy secured their first win of the year on the Ulster Rally, with the Ford Fiestas of Stuart Biggerstaff, Jason Mitchell and Aidan Wray rounding out the top ten positions at the head of the main field. 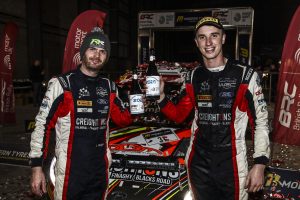 The Junior British Rally Championship was also settled on the Ulster Rally. Twice a runner-up, it all came good for Moira’s William Creighton whose reward is a fully-funded drive on a round of the World Rally Championship next season. Eamonn Kelly chalked up a second Junior BRC win of the year in Newry – but it still wasn’t enough to deny Creighton the highly lucrative prize. British Academy Trophy champion Johnnie Mulholland lay claim to the last step on the JBRC podium.

“I’m delighted with the result and to finally get the JBRC title means so much,” said 24-year-old Creighton. “We made it quite hard for ourselves this season after not finishing the Nicky Grist, so we knew we had to score maximum points on every other round. I’m just so happy to get this result. I didn’t even want to think about the World Rally Championship prize to be honest; for now, I just want to enjoy this moment because it’s been a long time coming for me,” he added.

“An amazing day of competition”

Summing up the 2021 Modern Tyres Ulster Rally, Event Director Richard Swanston paid tribute to all those who made it possible. “I’m so proud of the team who put this event together and created such an amazing day of competition. The tough stages delivered thrills and spills but, ultimately, produced a worthy winner,” he said. “Thanks to all the volunteers who came out to make the event a success, and thanks also to all our sponsors who supported the event.”

Stephen Shaw, from title sponsor Modern Tyres, added: “Full credit to Richard and his team for organising and running a fantastic event. We are delighted with the coverage and it is great to get so much positive feedback on our new Newry facility. Congratulations to all crews and in particular Matt Edwards and William Creighton on winning their respective British Rally Championships titles. Thanks to everyone involved in making it such as success.”

For a full list of results and class winners, please visit www.ulsterrally.com